Seeing as we’re nearing the end of PST, I realized I should probably start working on that portfolio thing (due Monday, yikes). One of the optional assignments is record all the different community gatherings you attended, and I thought that rather than writing this all out on a piece of paper that will get thrown away, why don’t I blog and then everyone back home who is interested can learn more about the different events I’ve been too. Genius, I know. If you recall I went to a Muslim baby dedication, which I wrote about back here. In the past few weeks, I’ve been lucky enough to get to see lots of other ceremonies/events (although I still haven’t been to a wedding, a funeral, or circumcision).

One day I was dutifully studying in my living room when my aunt came in and asked if I wanted to help cook. It was the middle of the afternoon, not yet time to get ready for dinner…what were they cooking? I followed her back into her kitchen where my other aunt was sitting and I saw that they were in full-blown production mode, making 100+ kue ketan. Kue means “cake” in bahasa Indonesia and “ketan” basically means wrapped in banana leaves – and the thing that is wrapped is usually rice. Kue ketan can be savory, with chicken or beef inside, or it can be sweet, with coconut. Ours was sweet. They sat me down and handed me some banana leafs. “Here, wrap up the rice.” So I did, and as I wrapped and tied and wrapped and tied, I was trying to understand why we were making so many rice cakes. A few days later, I got my answer. I came home from language class to find that there were copious amounts of food in the house. Everyone keep telling me, “Seribu hari, seribu hari,” when I asked why. Most of the food was in my aunt’s house and she made me eat firsts and seconds, followed by a round of kue ketan. The next day in class my language teacher explained that in Javanese culture when someone dies they reach to bury the body…usually within 24 hours. After that there are a series of commemorations for the deceased. If I recall correctly, these take place 40 days after the death, 100 days after the death, and the last one is 1000 days (seribu hari) after the death. In this case, my aunt’s father had died 1000 days ago and it was his final commemoration. As far as I know there wasn’t a ceremony, per se, just lots and lots of food that got delivered in little boxes to friends and family (this is the most typical way that the Javanese celebrate anything).

Wayang kulit has so far been my favorite Javanese cultural tradition. Wayang kulit are shadow puppets and a wayang show will last start anytime from 8-10 PM and last until between 2-4 AM. (When people here sleep is a mystery I have yet to solve…) There is one puppet master and he has to have the incredible ability to sit crosslegged for 6-8 hours and perform the puppet show sendiri (by himself). It’s amazing! A few weeks ago our village was lucky enough to host a wayang show (on the same day as bantenga…see below). There were a couple hundred people there and while I only got to watch about an hour (we had our final language exam the next day) it was really interesting. The music is traditional, and it features gamelon (see below), plus there are always female singers. The puppet show follows the music, and it is fascinating to watch…although I did get really sleepy after awhile. Since a picture is worth a thousand words, here are some photos to give you an idea of what’s it is like. 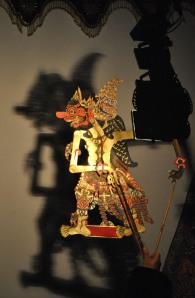 Silat is Javanese traditional martial arts. My village held a silat show over a month ago and I went with my family. There were probably 100 people there and the silat students were from elementary school through adults (possibly the adults were teachers, but anyway, they still demonstrated silat). There was traditional music playing and the silat was set to the music so it looked like a cross between interpretative dance, martial arts, and yoga. The student(s) would move slowly and then hold a pose before transitioning to the next movement. It was very fluid and really beautiful to watch. As usual, this didn’t start until 9 or10 PM and lasted until early in the morning. I didn’t stay too long so I only got to see a few students but I definitely want to see more.

April 21st is Kartini Day. Kartini was one of the first Indonesian feminists, and she fought tirelessly for women’s rights, including education for girls. Before her time girls couldn’t go to school in Indonesia but thanks to her hard work there were laws passed mandating that girls go to school, just like boys. On April 21st our group went to the local preschool/kindergarten (called ‘play group’ here) where the children were all dressed up and ready to march in a parade. Some were in an actual marching band, and I was very impressed by their musical abilities at such a young age. Others were dressed up in traditional clothes and LOTS of makeup. It was strange and a little creepy, actually, to see all these little girls dressed up to look like women with full hairdos and makeup and everything. I didn’t really like that part, but it was pretty funny to see my little host brother Panji (age 5) with a fake moustache. J (For photos, see my facebook album.)

Bentanga happened in my village on the same day as wayang but it took place earlier in the afternoon. I also saw it in Batu City the following weekend. Bentang is the wild (mythical?) bull of Java. In bentanga, men and/or boys dress up in a bull costume (think dragon costume for Chinese New Year…several people underneath a long piece of cloth with a huge mask of a bull’s head leading the way). There are also bull masks for single people. The scene takes place in the street. First, there will be one man who is covering the nose and mouth of another man/boy. Sometimes their head or face is covered with a cloth. They appear to be losing consciousness and they go into a trance state. According to my cousin, they are inviting the spirit of the bull to possess them. Once they are possessed, they start moving jerkily and they wear the bull mask and dance around a little. There is another man with a whip and he will whip the man-bull. At one point I saw a boy laying on the ground, his face covered by a cloth, and a man whipping him. Honestly, this whole thing was really creepy and made me uncomfortable. I had a couple interesting discussions with my family about it. My cousin Ratih and my brother Ilham both really don’t like it and say that it’s bad but my 5-year-old brother Panji is fascinated by it and always asks to see the photos I took of bentanga (coming soon on facebook).

MTD is a festival that takes place every year in the city of Malang, which is the biggest city close to me (during training). During the weekend-long festival, everyone who participates dresses like they did back in the olden days and there are perfomances of various types of traditional music and dance, along with LOTS of street vendors and items for sale. I didn’t really get to see any crazy costumes but the place was PACKED. I also bought a gorgeous batik scarf that I basically haven’t stopped wearing since I purchased it…especially now that I’m adjusting to the climate and I’ve realized, yes, Batu is cold!

So that wraps up my list for now of community events/gatherings/festivals, etc. Javanese cultural is rich with traditional dance, music, entertainment, and other customs. I have enjoyed seeing this myriad of activities and I’m hoping to learn more about the history and meaning of these cultural traditions while I’m here.

I'm Sarah and I like many things starting with the letter "S," including (but not limited to) Seattle, springtime, summer, sunshine, swimming, sunrises, surprises, and sociology. For anything else you want to know, you will have to read my blog!